This is the documentation of the eBUS adapter, which can be used to communicate with an eBUS enabled heating, ventilation or solar system.

You can reserve such an adapter here and it will then be sent in sequence as soon as the next batch is available. 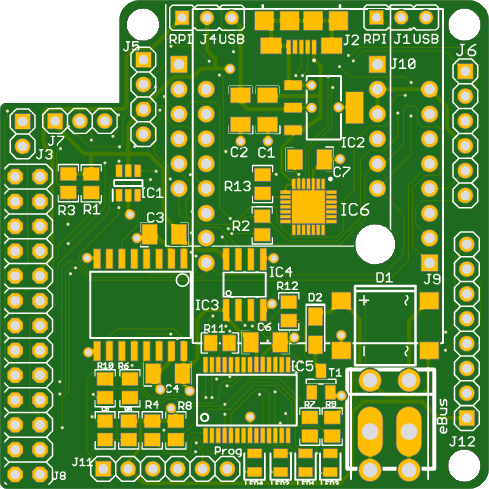 USB support is built into all variants, as the CP2102 is always installed directly on the board. This is necessary, to e.g. update the PIC firmware or to adjust the Ethernet configuration.

For the enhanced protocol, a high-speed variant may be used for serial connections (USB, RPI and WIFI) that avoids unnecessary delays due to the transfer of data from/to ebusd (or ESP). This can be activated by setting a jumper on J12.
The ebusd device configuration then needs to be changed from enh: prefix to ens: prefix for direct serial connections (i.e. USB or RPI).
For WIFI, the ESP firmware needs to be configured accordingly and the ebusd device configuration remains at enh:. 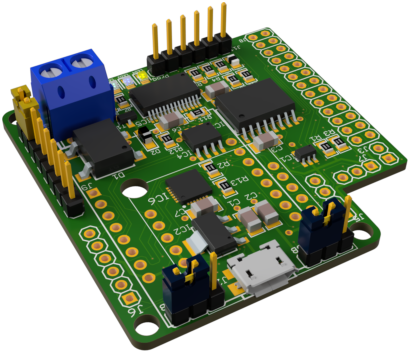 To use the adapter via USB port J2, the jumpers have to be set as follows:

The ebusd device configuration is e.g. -d enh:/dev/ttyUSB0, where ttyUSB0 might be different when several USB serial devices are connected. 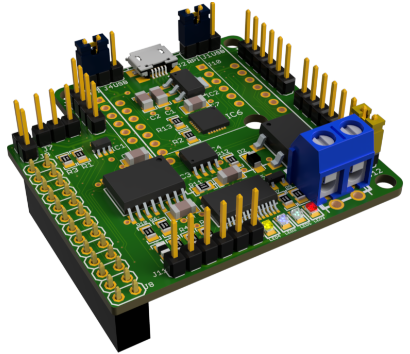 Using the 2x13 socket J8, the adapter can be plugged onto the Raspberry Pi directly. The jumpers have to be set as follows:

The power is supplied directly via the Raspberry Pi socket J8. 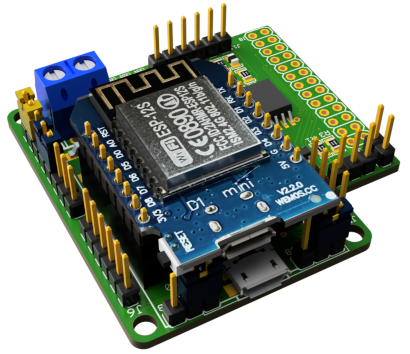 By plugging a LOLIN/Wemos D1 mini with ESP-8266 onto socket J9, the adapter can be used via WIFI. The jumpers have to be set as follows:

The Wemos has to be flashed with a suitable firmware, e.g. ebusd-esp (starting from version 22.11.2020). ebusd-esp then has to be configured to “Adapter 3 RX+TX”. 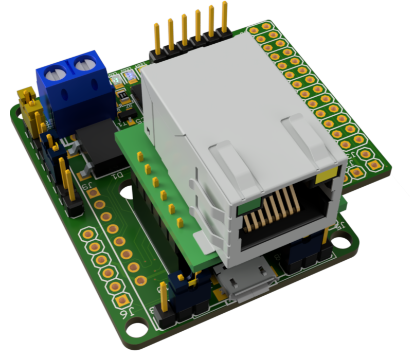 By plugging a USR-ES1 modul with W5500 onto socket J10, the adapter can be used via LAN. The jumpers have to be set as follows:

Connection of sensors, actuators or displays

In the variants with Wemos and Raspberry Pi, the following pin headers are available for connecting additional components:

The PIC programming connector J11 allows exchanging the Firmware of the PIC as well as the bootloader with an appropriate programming device. This should only be necessary in rare cases, as the PIC was programmed before delivery and the adapter can therefore be used immediately. For more details, see PIC Firmware. 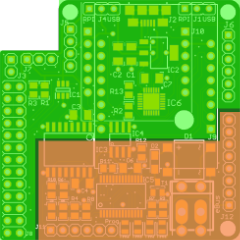 In addition to the adapter, software is required that interprets and evaluates the eBUS traffic. This is done for example by ebusd, which can also be installed on a Raspberry Pi.

Simultaneous use of USB for ebusd and Wemos for sensors

[TODO Testen]
The jumpers have to be set as follows:

The power is supplied directly via the USB connector J2 on the adapter and RX/TX of the Wemos and its USB serial cannot be used (on RX eBUS traffic comes in).

Attention: Always connect only one power supply, i.e. a maximum of one connection of: 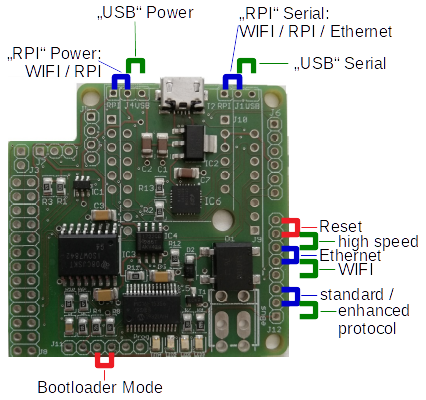 Here are some links that contribute to the topic or contain basic information, some of which are in German only: